A couple weeks ago, my friend Anju and I were discussing some new cinematic release, when she innocently stated that she doesn’t have much time for any movie released before 2000; apparently ‘older movies have little enduring value and were too dated to enjoy’. Whaaaaaaaaat?!?!?! That statement just sent me into conniptions. The poor girl didn’t know her fateful words had unleashed a dragon.
The ensuing minutes are still blurry, I don’t remember who said what, my brain was just overheating. Once I stopped foaming at the mouth and gesticulating like a crazed woman, I vaguely remember Anju faintly asking me to recommend ONE movie that would contradict her point. The first title that popped into my mind was 12 ANGRY MEN (1957). 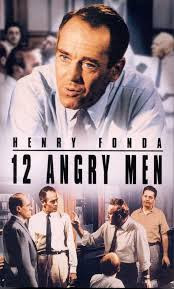 It’s not even my favorite, it has no female cast, there are no action scene, definitely no special effect: just 12 men in a room.

But the plot is so riveting you don’t even want to pause the dvd for a pipi break.
The movie is on the very short list of works defined as ‘classical’ in the Aristotelian sense for respecting the three unities which make up a classical masterpiece – unity of action, unity of time, unity of place.

The drama was first adapted to the stage and then to the screen in 1957 and 1997; my preference goes to the 1957 version because of the stellar performance given by Henry Fonda, nominated for both a Golden Globe and a BAFTA (won) in 1958.

I’m eagerly waiting to hear what Anju thinks of the movie but first I’ll have to refill my valium prescription to mute my response, just in case…